I am in the beach resort and port town of Qingdao, well known for its beer brand in China. The reason for my visit is the 2014 Horticultural Exposition, which was opened with great fanfare today. INBAR has joined the Qingdao Expo to highlight the role that bamboo plays from a horticultural perspective.  Celebrations started yesterday evening with a gala dinner, where I was joined by the Ambassadors of two of our member countries, Madagascar and Nepal. Today was the formal opening of the Expo, and beautiful weather with sunshine and a slight breeze allowed the ceremony to take place in full glory.

There were hundreds of invited guests, from many corners of the world and a good number of Chinese VIPs as well. I sat next to Vice Minister Zhang Yongli from the State Forest Administration, INBAR’s host agency and a great supporter of bamboo and rattan. Vice Minister Zhang and I enjoyed the preparations before the actual ceremony started. 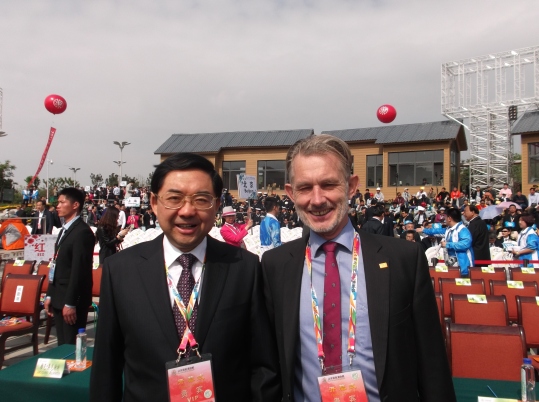 The opening was a very well-orchestrated fanfare of music, dance and speeches, with the official flag raising ceremony as well. Individual Chinese singers provided leading music pieces, while a large choir helped to provide the background music. There were dancers in traditional costume, there was a children’s choir, and we had clowns and balloons.

Speakers included the Vice-Chair of the INBAR Board, Professor Jiang Zehui, and the Secretary-General of the International Association of Horticultural Producers (AIPH), Tim Briercliffe from the UK. When the speeches ended, the organisers released more than 100 doves, who flew overhead to provide a fetching finale to the opening ceremony. After the official ceremony was concluded, I went to the INBAR Garden to wait for some of the VIP guests, and was very impressed with what has been achieved during the past year of planning and construction.

The garden is well laid out, and has 22 species of bamboo from all over China.  Bamboo is used to aerate a small stream, to show how manmade wetlands can help with water treatment.  We had arranged for s music ensemble that plays on instruments made from bamboo to provide a nice atmosphere.  The garden has wooden decking everywhere, which is made from engineered bamboo; there is a traditional bamboo house made from round bamboo, and a modern showroom with many bamboo and rattan products, as well as a bridge made from rattan.  My colleague Dr Fu Jinhe told me that the bridge is one of the most photographed places in the garden. .

Dr Fu Jinhe from INBAR on the rattan bridge

In the afternoon, I had the opportunity to see a few other places. I attended a ceremony at the Dutch garden, and accompanied the Ambassador of Nepal to China, Mr Mahesh Kumar Maskey, to the Nepal pavilion.

Nepal Ambassador and INBAR Director-General in front of Nepal pavilion

Tomorrow is the official opening of the INBAR Garden, so more news from Qingdao tomorrow.