The report concludes that in 2012 the international trade in bamboo and rattan amounted to USD 1.9 billion. However, these figures are questionable, for the following reasons:

The recorded international trade of bamboo and rattan products in 2012 was nearly USD 2 billion, and the predictions for 2015 amount to USD 2.5 billion, but the shortcomings that I have just listed mean that the real figure could be much more.

Even if we assume that the figure for international trade is double what we have recoded, cross-border import and export is dwarfed by the domestic market, and the total value for trade of bamboo and rattan globally is therefore a lot more than the international trade figures would suggest.   Let me explain.

We have a fairly good idea of the domestic trade in China, as the State Forestry Administration of China has a bamboo development plan. According to the official statistics, the national production value of bamboo industry increased to USD 19.5 billion in 2012 from USD 13 billion in 2010, with an annual grow of 16%. Using the same figure of growth for the following years, the production value of bamboo industry of China in 2015 can be expected to be as high as USD 36billion. 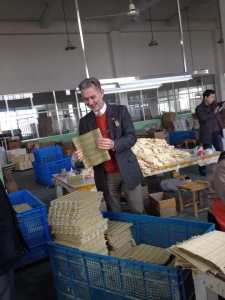 In a bamboo handicrafts factory in Anji County, Zhejiang Province

The other main bamboo producer in Asia is India. In 2011, the Forest Service of India reported a total cover of bamboo forests in India of nearly 14 million Hectares, which is more than double the 6.7 million Hectares of bamboo reported by the State Forestry Administration of China in 2013. Yet, despite the fact that there is such a large amount of bamboo available in India, the potential size of bamboo industry of India in 2015 is estimated as USD 4.35 billion in a recent report by Aniket Baksy.

This must be an underestimate, but there are no reliable up-to-date statistics for bamboo trade in India, maybe due to the fact that in many States bamboo is simply included in forest and timber statistics. I know that the bamboo industry in India is not as developed as the bamboo industry in China, but I cannot believe that the production is only one-tenth of what China produces.

Using the figures above, the total domestic market of China and India, the two most important traditional bamboo producers in Asia, and arguably in the world, would amount to at least USD 40 billion by 2015, but it is presumably more.

Although we have little or no information, it is very likely that a domestic market also exists in other traditional bamboo producing countries in Asia, like Indonesia, Vietnam, the Philippines, Thailand and Malaysia. There must also be a local market in Brazil and Mexico in Latin America, and in some African countries with significant bamboo resources such as Ethiopia and RDC.

We have no real figures, but using the trade distribution in the international market in 2012, the domestic market of bamboo products in the major producing countries, excluding China and India, can be estimated to be at least USD 5.5 billion in 2012. This is again a gross under-estimate as we have no statistics for DRC, and Brazil does not record its trade in bamboo. Yet, these countries both have significant bamboo resources, simply by virtue of the size of the country.

If we use the figure of USD 5.5 billion as the baseline, and we apply the same 16% growth for other countries as experienced in China during the past years, there will be an additional USD 9 billion by 2015.  This would lead to a combined total value of domestic trade in bamboo products of nearly USD 50 billion, which is more than ten times the value of the recorded international trade. 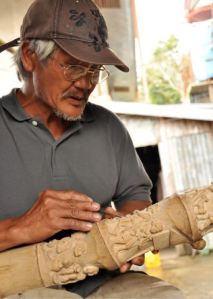 The area of natural rattan distribution is much smaller than the natural cover of bamboos. Using the percentages of bamboo and rattan products in international trade, an amount of USD 6.2 billion can be estimated for the domestic market for rattan products in the major rattan producing countries in 2012. As the general view holds that rattan trade is not expanding very much, or maybe even contracting, we can assume the same figure of USD 6.2 billion for 2015.

Using these estimates above, the global trade of bamboo and rattan products in 2015 can be considered to have a value in the order of USD 60 billion. But, as I said earlier, these figures are most likely still gross under-estimates, and INBAR will try to get better information directly from the countries during the coming years. I cannot make any founded suggestions about the real figures, but the real value of global trade in bamboo and rattan products must be more than USD 60 billion. This is serious business!